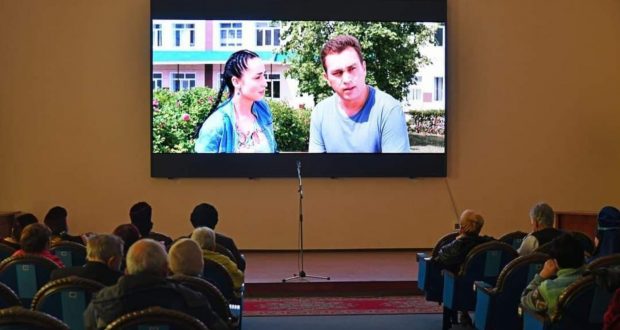 The film “Sumbul” is shown in Tatar language in Tashkent

On November 7, 2021, in Tashkent, in the Committee on Interethnic Relations and Friendly Relations with Foreign Countries under the Cabinet of Ministers of the Republic of Uzbekistan, a screening of the full-length film “Sumbul” based on the novel of the same name by the Tatar writer Zifa Kadyrova, filmed in 2019 by the cinematographers of Tatarstan and Uzbekistan, took place. The film was shown in Uzbekistan in the Tatar language for the first time.

The director of the State Budgetary Institution of Culture of the Republic of Tatarstan “Tatarkino” and  producer of the film Milyausha Aituganova, the main character of the film, the Uzbek actress Sabina Asanova and the author of the book Zifa Kadyrova, addressed the compatriots in an online format with welcoming words.

The film touched the hearts of viewers with its deep content, especially of the adult generation. Mental experiences for the heroine of the film Sumbul, made me cry in places, rejoice in places and admire the magnificent acting.

It is noteworthy that in the film the Russian, Tatar and Uzbek languages ​​are smoothly intertwined and help the perception of what is happening on the screen.

After watching the picture, Rishat Nabiullin, Chairman of the Board of the Tatar Public Cultural and Educational Center (TOKPC) in Tashkent, expressed his gratitude to the filmmakers, wished them success and new international projects between Tatarstan and Uzbekistan.