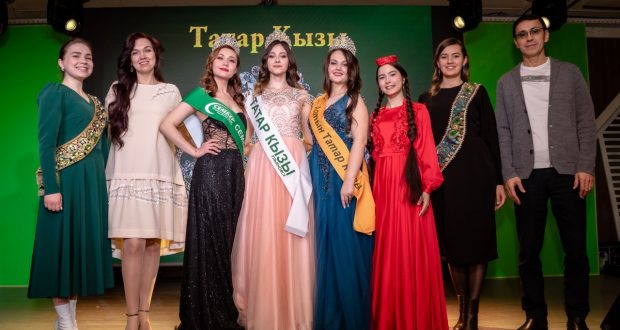 On the eve, seven finalists of the VI regional competition “Tatar kyzy – 2020” brilliantly defiled on the podium, fervently danced in the national dance, but they were united by love for their native language and culture, which led Alsu Usmanova to victory.

Despite five competitive tasks in non-stop mode, all the contestants performed in such a way that the audience received real pleasure from what was happening on the stage. The business card was combined with the nomination “Hospitable Tatar Kyzy”, which means that dishes of national cuisine appeared on the jury’s table every now and then. Of course, the contestants worried, forgot the text, switched to Russian and sometimes seemed to recite a memorized text. But they did everything sincerely, and this was especially appreciated by the jury.

It was the visiting card of the “Tatar kyzy” chosen as a result that turned out to be the most thorough, competent, harmonious. The speech was, of course, in Tatar, therefore it was understandable only to native speakers.

“I talked about the uniqueness of the Starokulatkinsky district, where 98 percent of the residents are Tatars, about the former head of our district Eduard Ganeev, who did a lot to establish a national culture in our region. And of course, about myself – about my studies and my hobbies, ”Alsu Usmanova explained during the break.

– And yet, where does a modern girl have an excellent command of the language?

– In my family, everyone communicates in their native language. I even think in Tatar, I have to translate into Russian. Therefore, it was not difficult at all.

Another test for individuality was presented by the tour “Talented Tatars Kyzy”. The finalist of the second season of the show “Voice. Children ”, the star of Tatarstan, the singer Saida Mukhametzyanova. Then she touchedly performed two songs in the Tatar language, after which she took a place in the jury.

Six girls chose a vocal number. Only 24-year-old 6th year student of the medical faculty of UlSU Elza Mazitova, a future psychiatrist, prepared a show with meaning, for which she sewed costumes herself.

“I imagined two existential crises between an adult and a child. A child grows up looking at his parents, and the traumas that he receives in childhood remain with him in adult life. With a team of fellow doctors and my nephew, I wanted to show through dance that we still need to be more attentive to raising children. It was important for me to convey to the viewer that mental health, including the child’s, is most important, ”said Elsa.

However, the girl herself came to the competition to work out the child’s fear of speaking in front of the public. And she overcame him.

And the 23-year-old fifth-year student of the UlGPU Elmira Abdullova fulfilled her old dream – thanks to the Tatar Kyzy competition, the girl first appeared on stage and sang in the light of spotlights.

“Yes, I was worried, but I did it. Dreams Come True!” – the girl shared her joy with us.

The winner skillfully defiled on stage (she had experience in a modeling agency) and sang the song perfectly in a vocal competition.

“I graduated from a music school, majoring in vocals and piano. I have been singing since childhood and performing on stage, which is why I hold myself so confidently in front of the audience, ”said Alsou.

The newly made Tatar kyzy is studying to be a teacher of mathematics and English in the second year of the Ulyanovsk Pedagogical University. Thus, she decided to continue the dynasty of teachers. Her mother, Gulshat Ryakhimzhanovna, is a teacher of Russian and native language at Starokulatka School No. 1, her grandmother teaches history. Moreover, after graduation, the girl intends to return to her native Staraya Kulatka.

“The urban lifestyle is not for me, the village is closer to me, there is fresh air, an apiary, sheep, it’s easy to breathe!” – Alsou admitted.

However, very soon, the newly-made beauty will be waiting for a cycle of competitive events. She will have to fight for the crown of the international competition “Tatar Kyzy” and a brand new car. In early August, she will go to Kazan for the semifinals with the participation of girls from 15 countries and 45 regions of Russia.

“Among 60 representatives, we will choose 19 finalists of the International Competition,” explained Guzaliya Giniatullina, Executive Director of the International Competition “Tatar Kyzy”. – In early October, we will go with them to Uzbekistan – the homeland of the winner of 2019, Lilia Kamilova. There the “Tatar Kyzy – 2020” will be determined. But this story is still not about a competition and competitions, but about immersion in Tatar culture, friendship, networking ”.