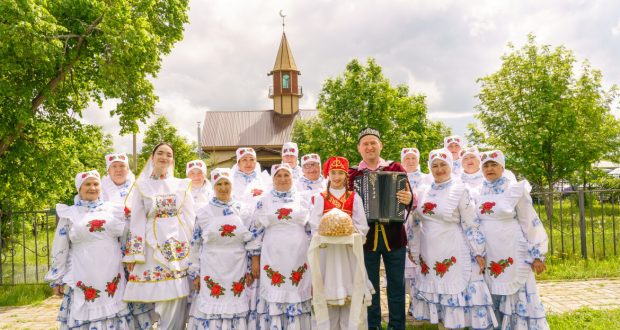 Residents of the village of Topasevo, located on the right tributary of the Menzel River, celebrated the traditional local holiday “Avyl Zhyyny”. The event was dedicated to the opening named after the Nayip Khuzzyatov spring, has been  reconstructed by Yadran Group of Companies.

From early morning, the atmosphere of an approaching celebration reigned in the village. Adults and children diligently prepared for the arrival of the guests and the beginning of the festive festivities, and local artists once again rehearsed prepared numbers.

In the photo: Irek Salikhov, Chairman of the Board of Directors of Yadran Group of Companies, with guests at the opening of a spring in Topasevo.
One of the main events of the holiday was the opening of an ancient spring, named after fellow countryman Naip Khuzzyatov, who since the middle of the last century has been taking care of the spring discovered by his grandfather. On the way to the sights well-arranged by the builders, Tatar folk songs and national dances of local groups awaited the guests. All residents came out of their homes and joined the festive procession. Foat Zaripov (actor of the Menzelinsky Tatar Drama Theater) met the guests at the spring in the role of Naip Khuzzyatov.

According to the Tatar tradition, the imam-hatib of the village Fanil Gazizov pronounced the azan. Later, at the mosque, he told our correspondent that the spring was used by several generations of the villagers, who are already over 300 years old.

Farit Salikhov, President of the Charitable Foundation “Thanksgiving”, congratulated all those present on the holiday: “Today is a big event in the history of the village of Topasevo! We are opening the spring after reconstruction.”

The first thing I noticed was the arch above the entrance. “All those who look after reservoirs and springs are doing a good deed comparable to the Hajj,” he read. “These wise words sit in the deep memory of our people. In 1954, fellow villager Gizzyat babai discovered a spring, at first he looked after the spring, then his son erected a log house here near the spring, put the road in order. Then the grandson – Naip – gave a new life to this spring.

He appealed to the villagers with a request to pay attention to the natural source, take care of it independently, protect it from snow and ice. “The builders covered the spring, installed capping so that residents could drink clean water. The water here is very good, clean, tests have been carried out,” he said. “I remember when I was still a youngster, my grandfather also looked after the spring, laid a path and steps to make it easier for the residents. Every spring, he restored the spring as best he could after the spring flood,” Farit Salikhov shared his memories. “Keep the tradition, take care of the spring. Here you can hold wedding and national ceremonies, show the brides the way to the spring,” he suggested.