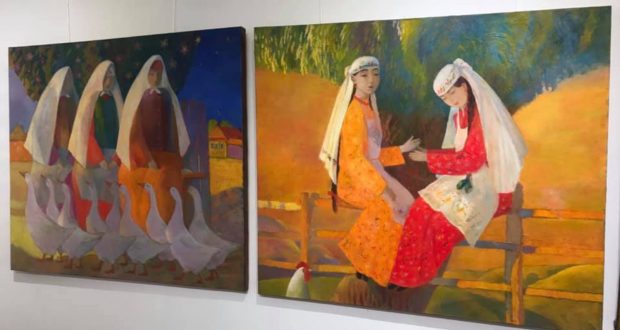 At  the exhibition hall of the St. Petersburg State Budgetary Institution of Additional Education “Children’s Art School named after M.K. Anikushin of the Kronstadt district of St. Petersburg “, the grand opening of the exhibition” Hasite “by Ramzia Zinnatova took place. The exhibition is timed to the Year of Native Languages ​​and National Unity in the Republic of Tatarstan.

The event was attended by: Permanent Representative of the Republic of Tatarstan in the city of St. Petersburg and the Leningrad Region Renat Valiullin, Deputy Head of the Zelenodolsk municipal district Nikolai Byzin, Head of the Council of Deputies of the City of Kronstadt Natalya Chashina, representatives of the Tatar community, the media, etc.

The Permanent Representative of the Republic of Tatarstan Renat Valiullin addressed the guests with welcoming words. He thanked Ramzia Zinnatova for her invaluable contribution to the preservation of the traditions of the Tatar people and the administration of the Kronstadt district of St. Petersburg and Zelenodolsk district of the Republic of Tatarstan for the development of joint projects aimed at strengthening cooperation between the regions.

At the exhibition, the guests got acquainted with only a small part of Ramzia Zinnatova’s works – with canvases illustrating her loyalty to the theme of the national in her work: traditional motives in the national costume and interior. These canvases are painted in the best traditions of the realistic school.

The Hasite exhibition was organized within the framework of the signed cooperation agreement between the Zelenodolsk region of the Republic of Tatarstan and the city of Kronstadt. The signing of twinning agreements shows its effectiveness and contributes to the development of business, cultural, tourist and educational ties not only between the districts, but in general, between the regions.

The delegation of the Zelenodolsk region, as part of its business trip to Kronstadt, will also discuss further plans for organizing joint projects in the field of culture and trade and economic cooperation.

Ramziya Shaidievna Zinnatova was born in Kazan in 1954. In 1973 she graduated from the theatrical and decorative department of the Kazan Art School, and in 1980 – the graphic faculty of the Academy of Arts named after I.E. Repin. Lives and works in St. Petersburg, teaches at St. Petersburg State University at the Faculty of Philology and Arts of the Institute of Arts. Member of the Union of Artists of Russia since 1985. Since 1980 – an active participant in exhibitions in St. Petersburg, Kazan, China (Shanghai). Her works are in the funds of the Ministry of Culture of Russia, the Russian Academy of Arts, the State Museum of Arts of Tatarstan, museums in Germany, private collections in Russia, France, Germany, Ireland, South Africa, the USA, etc.