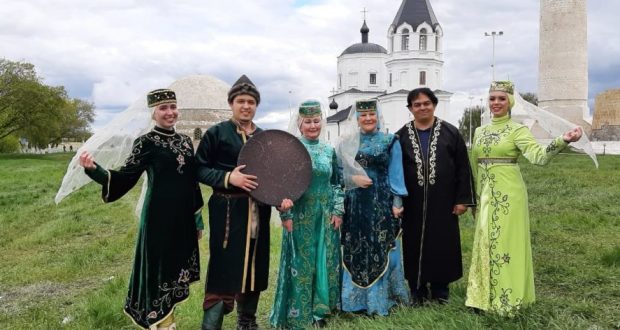 The groups of the Tatar Cultural Center are the Medina Spiritual Music Ensemble and the Shatlyk children’s folklore ensemble took part in the gala concert of the interregional competition-festival for the performance of works of oral folk art and samples of the spiritual heritage of the Tatar people “Ilaһi Mon” in the city of Bulgarians as part of the events dedicated to the 1100th anniversary of the adoption of Islam by Volga Bulgaria.

The ILAһi MOM competitive festival is held by the Russian Islamic Institute and the Spiritual Directorate of Muslims of the Republic of Tatarstan with the participation of the World Congress of the Tatars, the Bulgarian Islamic Academy and other specialized organizations of the Republic of Tatarstan.
The purpose of the competition is the development and propaganda of the cultural, spiritual traditions of the Tatar people, the formation of a culture of interethnic relations and consent in a society, the popularization of Muslim traditions of chants among the population of the Volga-Ural region; The formation of an aesthetic taste, religion and readiness for intercultural dialogue on the example of a living heritage.

Both collectives took the 2nd place in the nomination “Execution of Baits, Munazhites.” “Medina” is among adult musical ensembles, and “shutly” is among children’s musical ensembles. They were awarded honorary diplomas. The head of the Shtlyk ensemble, the deputy land of Sakhabutdinova, also received a letter of thanks from the World Congress of the Tatars. We congratulate our groups on a high achievement and wish further creative success!