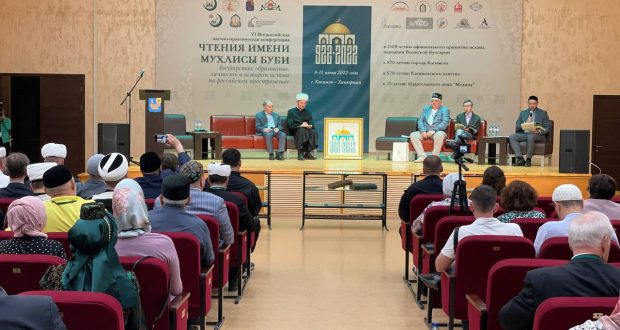 Today in Kasimov, the VI All-Russian Scientific and Practical Conference “Readings named after Mukhlisa Bubi” on the topic: “The state, education, personality in the history of Islam in the Russian space” started. The conference is held within the framework of cultural and scientific events dedicated to the 1100th anniversary of the official adoption of Islam by the peoples of the Volga Bulgaria, as well as the 870th anniversary of the founding of the city of Kasimov. This year also marks the 570th anniversary of the founding of the Kasimov Khanate. One of the organizers of the conference is a historian, archaeologist, orientalist, local historian, head of the Committee for work with local historians of the Executive Committee of the World Congress of Tatars, chairman of the Regional Public Organization “Society of Tatar Local Historians” of the Republic of Tatarstan Albert Burkhanov.

“The theme of the scientific and practical conference is devoted to discussing the most important issues of the historical development of Islam and the Muslim Ummah of Russia, its past and present, outstanding personalities, whose great names and activities today constitute a problematic field for numerous studies. The focus of scientific attention is on prominent figures – statesmen, religious and public figures, the most prominent representatives and representatives of the peoples of Russia, many of whom are participants / creators of the historical process, ”Mufti Gainutdin emphasized.

Svetlana Andreeva, the head of the administration of the city of Kasimov, addressed with a greeting. She noted that today’s significant event makes a significant contribution to the preservation of interfaith peace, the development of high moral and moral values, respect for the memory and history of our people.

Honored Scientist of the Russian Federation and the Tatar Autonomous Soviet Socialist Republic, Academician of the Academy of Sciences of the Republic of Tatarstan, Doctor of Historical Sciences, Professor Indus Tagirov noted that in our difficult times, the Muslim factor is of particular importance, the importance of which is steadily increasing. “The Muslim factor is a factor of reconciliation, friendship and mutual understanding between nations…” he said.

The professor expressed his gratitude to the initiator of the celebration of the 1100th anniversary of the official adoption of Islam by the peoples of the Volga Bulgaria and the ceremonial events in Kasimov – the chairman of the Spiritual Muslim Board of the Russian Federation, Mufti Sheikh Ravil Gainutdin. He also noted the great work of the administrations of the Ryazan region, Ryazan and Kasimov in strengthening interfaith cohesion in the region.

“The history of Kasimov shows that Islam and Orthodoxy were in a state of complete mutual understanding here. This example is very important not only for our country, but for the whole world as a whole, in which these principles of cooperation and mutual understanding should also triumph … The celebration of the 1100th anniversary of the official adoption of Islam by the peoples of the Volga Bulgaria is not just a significant event and necessity – it is a call of the times ” , he noted.

He emphasized that “Kasimov is what represented the Tatars in the very center of Russia for a very long time. The link between Kasimov and Kazan was Queen Syuyumbike – “a tragic person who was loved by everyone – both in Kazan and in Kasimov …. she became an integral part of our history – the history of Russia.”

The organizers are: The Spiritual Administration of Muslims of the Russian Federation, the Moscow Islamic Institute and the Kasimovskaya Local Tatar National-Cultural Autonomy of the Ryazan Region with the participation of the Center for Islamic Studies of St. Petersburg State University, as well as with the assistance of the Safmar Foundation and the support of the Medina Publishing House with the participation the World Congress of Tatars, the Federal National-Cultural Autonomy of the Tatars, the Spiritual Administration of Muslims of the Ryazan Region, the local religious organization of Muslims in the city of Kasimov.