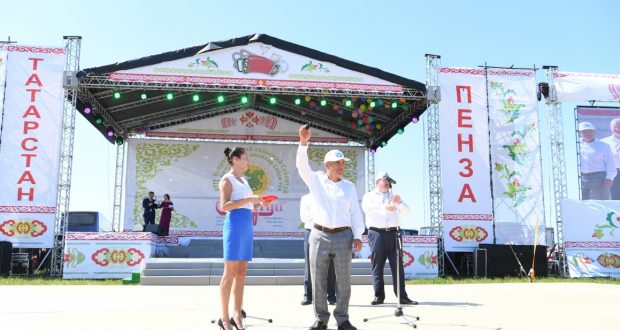 July 22 at the Tatar village of Srednyaya (Middle) Elyuzan in the Penza region  hosted the All-Russian rural Sabantuy-2017. Tens of thousands of people from 35 regions of the country became guests of the national holiday of the plow, correspondents of the portal “Penza-Vzglyad” reported. The guest of honor of the event, the President of Tatarstan. Rustam Minnikhanov has been  accompanied by Governor of the Penza region Ivan Belozertsev, Assistant to the President of the Republic of Tatarstan  Radik Gimatdinov, RT Minister of Culture Airat Sibagatullin and Chairman of the Executive Committee of the World Tatar Congress Rinat Zakirov.

Upon arrival at the festive site, the honorary guests viewed  the rural farmsteads organized by the Kukmorsky municipal district of Tatarstan and the Penza districts with a compact residence of the Tatars. Here, everyone could learn about the peculiarities of the traditional Tatar village life, get acquainted with the national cuisine, watch things from the wardrobe and various Tatar decorations. In addition, an exhibition of folk arts and crafts of the Republic of Tatarstan was presented.

“Today a wonderful holiday has been organized on the fertile Penza land. I am very happy that my old dream came true. I’ve heard so much about Sredniy  Eluzan and today I finally saw this village, “Rustam Minnikhanov said at the opening ceremony of Sabantuy.

He told the audience that today a new school and kindergarten have been  opened at the Tatar village. “Now we are with you on this festive site. Sabantuy is our tradition, our pride, our most beloved holiday. This year it is celebrated in 59 regions of Russia and 32 foreign countries. The main essence of Sabantuy  is to show the originality of the Tatar people. I congratulate all of you on this solemn event! “- added the President of the Republic of Tatarstan.

Then, Rustam Minnikhanov presented the state awards of the Republic of Tatarstan to the Penza people, who made a special contribution to preserving Tatar national traditions and strengthening interethnic relations. Also, the President of the Republic of Tajikistan handed over the keys to the new minibus to the head of the local Regional Tatar national-cultural autonomy.

On materials of the Press Service of the President of the Republic of Tatarstan.