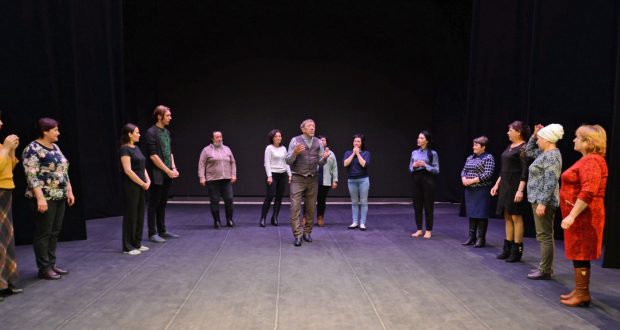 Today, on April 7, a creative laboratory is being held at the Buinsky State Drama Theater as part of the XXII Interregional Festival-Competition of Theater Groups “Idel-Yort” named after. Sh.Z. Zakirova. The program includes: a master class in acting with director Timur Kulov, an intensive course with the artistic director-director of the Buinsky State Drama Theater Rail Sadriev and a discussion of participants’ questions.

Creative laboratories have already covered more than 40 regions of the republic, and more than 370 representatives of amateur theater groups have taken an active part in them. In total, 11 creative laboratories are planned on the basis of professional theaters of Tatarstan for directors, actors, artistic directors, accompanists and other employees of amateur theater groups from all regions of the republic. Participants take training master classes, meet directors, people’s artists of the Republic of Tatarstan, artistic directors of theaters, participate in performance reviews and discussions.

The cycle of creative laboratories this year will end on April 11 at the Atninsk Tatar State Drama Theater named after G. Tukay. Soon, the period of preparation and performances of amateur theaters will begin, then the acceptance of applications for the XXII Interregional Festival-Competition of Theater Groups “Idel-Yort”.

The festival-competition “Idel-Yort” is a complex of educational and creative events that are aimed at supporting and developing amateur folk theater groups of the republic. By supporting and improving the competence of directors and actors of amateur theaters, teaching them at creative laboratories, we are reviving a real, vital theater that is so close to the modern audience.