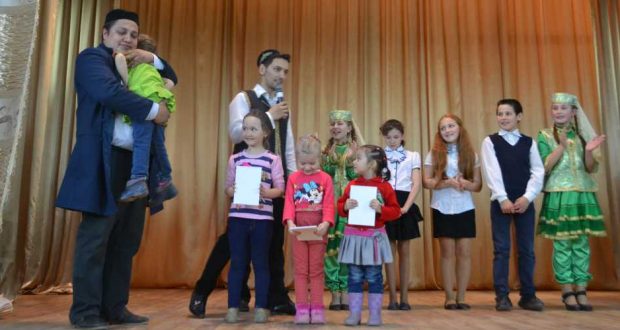 Earlier, the events in the Arsk region devoted to Gabdulla Tukai were held in New Kyrlay. This year, much attention has been paid also to the native village of the poet Koshlauch.

Last Friday, there was held one of the major events dedicated to G.Tukai. Even not one, but three events in a single day. Also, the writers, linguists, scientists and journalists came.

At first, the final round of the I All-Russian contest of lovers of Tatar literature «Literary gems» was held. The site «belem.ru» in September conducted a quiz contests “Literary gems”, dedicated to the life and works of famous personalities (e.g., Fatih Amirhan, Tazi Gizzat, Musa Jalil, Hasan Tufan et al.). During the month, the information was given about a specific person, and at the end of the month a quiz held. To win, you had a short time to answer all the questions correctly. The winners of the quiz (7 quizzes for 7 months) have

gathered in Koshlauch to a final stage of competing for the Grand Prix.

The Grand Prix (a modern portable music center and a special diploma) has been awarded teacher of the lyceum №5 of the Vakhitovsky district of Kazan Guzaliya Shaydullina. The grandchildren of Fatih Amirhan and Tazi Gizzat arrived for celebration. They brought their gifts for the winners.

– Under the terms of the competition one had to shoot video on tales of Tukai. Depending on the material used the works were evaluated by age categories and nominations. Style, originality of the ideas and efforts by the child were considered, – said head of the district department of education Zulfat Davletbaev. – The total of 105 works have been submitted. All participants are awarded certificates electronically. Those having won the first place were invited to a today’s celebration for awarding.

While the activities still were not over, presenters of broadcasting “Chyakchyak Show” on radio “Bulgaria» Marsel Akhmadullin, Rustam Gayzullin, Aigul Khairullina have arrived in Koshkauch. Together with an employee of the museum of Gabdulla Tukai in Kazan Lena Tyabina, People’s Artist of Tatarstan, singer Mingol Galiev, People’s Artist of Tatarstan Laura Shakirzyan they went on a trip “in the footsteps of Tukai”. First station – Koshlauch, then New Kyrlay. In the New Kyrlay guests met head of the district Ilshat Nureyev. Wherever they would have been, it was the hospitality inherent only to Ark residents. But presenters of “Chyakchyak show” came with a rich program. Artists pleased with their performances (group “Kazan egetlyare” joined in the New Kyrlay), the guests familiarized with historical exhibits from the Museum (postcards of 1907 with Tukai imge, a glass with historical inscriptions, which Tukai brought from St. Petersburg in 1912), read out poems , sang songs written to his poetry, competitions among children were held, a quiz with the audience.