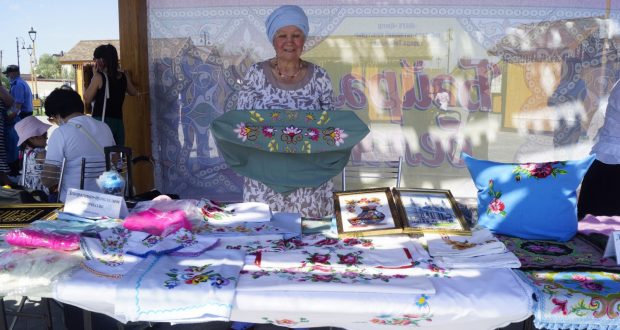 Tobolsk hosted a regional competition – the festival of Tatar culture “Siberian Gems” (“Seber Urlure”). The event brought together nearly 200 participants from the Tyumen region: the cities of Tyumen, Yalutorovsk, Tobolsk, as well as Vagaysky, Tobolsky, Tyumensky, Uvatsky, Yalutorovsky and other districts. The festival is aimed at developing the national Tatar culture, traditions and customs, as well as the creative abilities and personal potential of the participants. It became possible thanks to the victory of the IACC “Center of Siberian-Tatar Culture” of the city of Tobolsk in the SIBUR grant competition “The Formula of Good Deeds”.

Within the framework of the festival, participants and creative teams demonstrated their skills in five directions: “Vocals”, “Choreography”, “Artistic Word”, “Arts and Crafts” and “National Cuisine”. The best performed at the final gala concert, giving the residents of Tobolsk a real holiday.

– We are grateful to SIBUR for  excellent opportunities it provides within the framework of the grant contest for the Formula of Good Deeds social investment program. This program gives you a real chance to make your dreams come true. Our dream – to hold a regional festival of national Tatar culture – came true thanks to the program. Many thanks to the participants and spectators – thanks to you our festival has become so bright and unforgettable, as well as to everyone who supported our project in the choice  of grant applications. It is gratifying that the gala concert of the festival was also attended by nonresident guests who were at that moment on a tourist trip to Tobolsk. It’s nice to hear positive feedback from guests of our city and the audience of the festival. We sincerely hope that the festival will become traditional and will delight Tyumen, Tobolyaks and tourists with interesting colorful performances every year, ”says Gulsina Tashkeeva, director of the Siberian-Tatar Culture Center of the city of Tobolsk.

Awards have been  received by 63 participants and collectives  in 5 age categories. The smallest children also took an active part in the festival – children from kindergartens №40, №7, №1, MAOU secondary school №15 in Tobolsk. Bright performances in the vocal competition were shown by the ensemble “Suzge” MAOU Secondary School No. 15, Kristina Tonko (Tyumen), Lenaria Khasanova (Tobolsk). The jury noted Rimma Sharipova and Razaliya Kurmanalieva (Tobolsk) in the artistic word. Master Shaydulla Khamidullin had no equal in arts and crafts, his products are kept in museums around the world in Germany, in Moscow. Representatives of the Behetle cafe were in the lead in the gastronomic competition.