Home / News / Vasil Shaikhraziev and Alexander Burkov took part in the celebration of the 360th anniversary of the village of Karakul, Omsk region 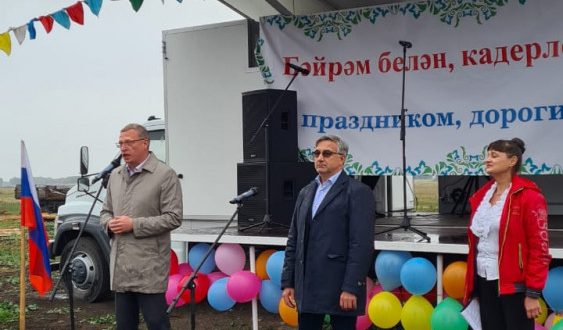 Vasil Shaikhraziev and Alexander Burkov took part in the celebration of the 360th anniversary of the village of Karakul, Omsk region

During today’s trip to the Omsk region, Deputy Prime Minister of the Republic of Tatarstan, Chairman of the National Council of the World Congress of Tatars V.G. Shaikhraziev and the regional governor Alexander Burkov visited the Tatar village of Karakul, which almost completely burned out in May of this year.

We will remind, on May 6, in the village of Karakul in the Omsk region, there was a large fire, as a result of which 25 buildings burned down, including 14 out of 33 residential buildings. During the summer, 9 residential buildings were restored in the village. They were built at the expense of funds raised by the Tatar communities; the President of Tatarstan Rustam Minnikhanov also allocated 3 million rubles.

Participants of the All-Russian Forum of Tatar Ethnographers also visited the village together with representatives of the authorities. They got acquainted with the life and culture of the inhabitants of the restored Karakul.

In his speech, Vasil Shaikhraziev expressed gratitude to the President of Tatarstan, as well as to the regional government represented by the governor Alexander Burkov, the chairman of the Regional Tatar national-cultural autonomy of the Omsk region Radik Minnikhanov, the chairman of the Tatar cultural autonomy of the city of Omsk Tamir Alimbaev and other caring people for their support.

“Today, the history of the Tatar people will write this in golden letters in the annals of the Russian Federation, as the second largest people of Russia in the most difficult times were able to support, extended their helping hands financially and morally.”