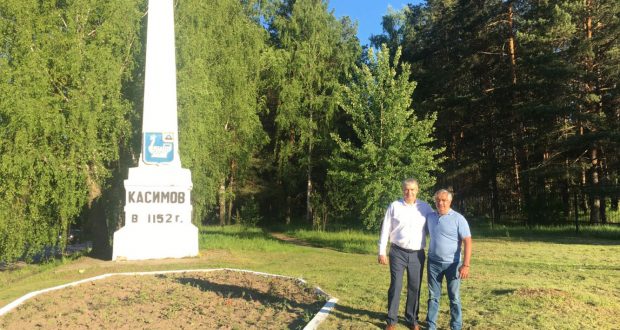 Deputy Prime Minister of the Republic of Tatarstan, Chairman of the National Council of the World Congress of Tatars Vasil Shaykhraziev arrived on a working trip to the city of Kasimov, Ryazan Region. He was met by the head of the Tatar national-cultural autonomy of the Ryazan region, Ildar Bikuev.

Today the Chairman of the National Council will get acquainted with the venues of the celebrations. On June 10, the opening ceremony of the monument to the ruler of the Kazan Khanate Syuyumbike will take place here.

The opening of the monument will be part of an extensive cultural and scientific program that the Religious  Muslim Board of the Russian Federation is holding in Kasimov on June 8-11, timed to coincide with the 1100th anniversary of the official adoption of Islam by the peoples of the Volga Bulgaria, the 870th anniversary of Kasimov, and also in honor of the Year of Cultural Heritage of the Peoples of Russia. It is expected to hold a festive Friday prayer in the Khan’s mosque of Kasimov, a festive concert for citizens and guests of the city, exhibitions dedicated to the anniversaries of others.