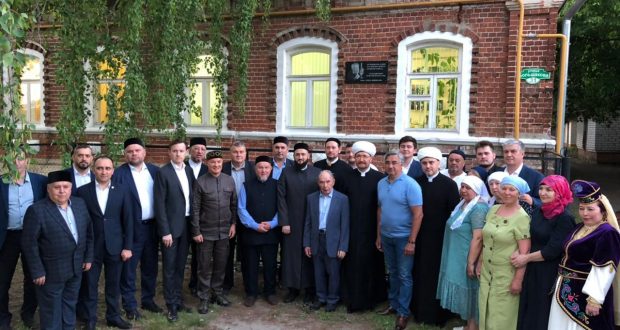 This cultural center was opened in 2014 in the former building of the Kasimov madrasah of the 19th century. Today, it houses an exposition that presents utensils, musical instruments and records, books and photographs, folk costumes that tell about outstanding personalities, history, life, culture and art of the Tatar people. In addition, in this center you can order a master class and learn the technique of Arabic script.

The tour for the guests was conducted by the Chairman of the Regional National-Cultural Autonomy of the Tatars of the Ryazan Region Ildar Bikuev.

Museum exhibits are located in four halls. In the first hall there are ancient items: folk costumes, musical instruments, utensils. In the second hall – photographs and documents of the early 20th century, printing products, information exhibition stands telling about the outstanding ancestors of the Kasimov Tatars. The third hall is dedicated to local historian, honorary citizen of the city of Kasimov Akhmed Ishimbaev. In the Fourth Hall there is a museum exposition dedicated to the outstanding female ruler Syuyumbika.

For reference:
Akhmed Ishimbaev (1906-1998) – front-line soldier, honorary citizen of Kasimov, honored teacher of the RSFSR, local historian. The works by Ishimbaev  have been included in the folk textbook “Kasimov: city and man”, which is a textbook for the discipline History of the native land.