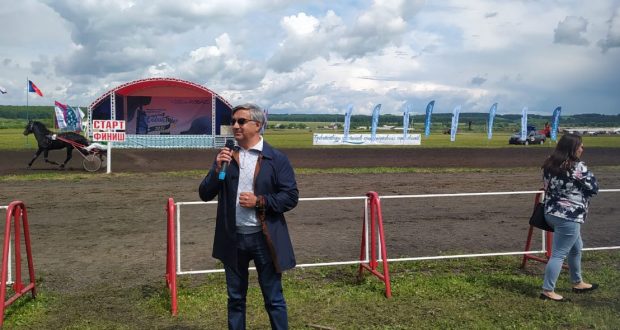 Horse races  have been  held today in the village of Kabanovo, Kemerovo Region, as part of the International Mining Sabantuy. Deputy Prime Minister of Tatarstan, Chairman of the National Council Vasil Gabtelgayazovich Shaykhraziev came to the holiday. These days he is on a working trip to the Kemerovo region. The event was also attended by  First Deputy Governor of the Kemerovo Region, Chairman of the Government of Kuzbass Vyacheslav Nikolaevich Telegin.

Guests on the Maidan were greeted with a chak-chak. Vyacheslav Telegin congratulated the audience on the Sabantuy holiday. “It is a great honor for us to hold such an event in our region during the celebration of the 300th anniversary of Kuzbass, which has a long history. Guests, veteran miners came here not only from the regions of Russia, but also from Kazakhstan, Kyrgyzstan, and Ukraine. I wish today’s equestrian competition participants great success, ”said Vyacheslav Telegin.

Welcoming the guests, Deputy Prime Minister of the Republic of Tatarstan, Chairman of the National Council Vasil Gabtelgayazovich Shaykhraziev noted: “We are very glad that today we are on this fertile land. The idea of ​​holding the first International Mining Sabantuy in the Kemerovo Region belongs to the Governor Sergey Evgenievich Tsivilev. Before that, we held our national holiday in different cities of the region. The proposal of Sergei Evgenievich was also supported by  President of Tatarstan Rustam Nurgalievich Minnikhanov. Today this holiday is celebrated within the framework of the 300th anniversary of Kuzbass. Tatar miners occupy an important place in the miners’ movement. And today labor veterans from different regions came to Sabantuy, ”Vasil Shaikhraziev said.

Horse races were held for the prize of  Governor of the Kemerovo Region. For the winner, the prize is a car. The sportsman Yevgeny Vorsobin received the keys to the car.

We  remind you that tomorrow, June 27, the official opening of the first International Mining Sabantui will take place. In it you can see national games, wrestling, as well as performances by art workers of Tatarstan and creative teams of Kuzbass.