Home / News / Vasil Shaikhraziev: “Our compatriots worked at all the mines of Russia” 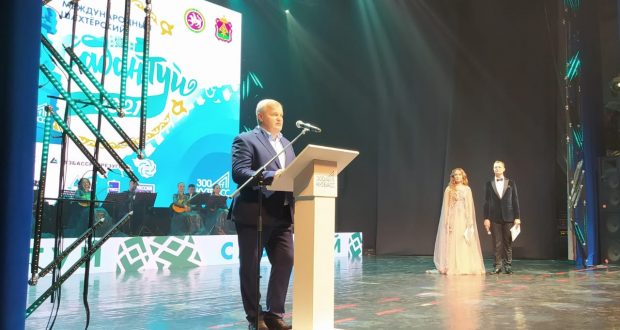 Vasil Shaikhraziev: “Our compatriots worked at all the mines of Russia”

On June 26-27, the International Miners’ Sabantuy takes place in the city of Kemerovo. Today the delegates visited equestrian sports competitions, got acquainted with the Cathedral Mosque of the city of Kemerovo and examined the exhibition of folk art crafts of the Republic of Tatarstan.

As part of the cultural program, a concert of the masters of arts of Tatarstan was prepared for the guests of the Miners’ Sabantuy.

The guests of the holiday have been welcomed  by Deputy Prime Minister of the Republic of Tatarstan, Chairman of the National Council of the World Congress of Tatars Vasil Shaikhraziev.

“When we say International Miners’ Sabantuy, we mean  our compatriots, in whose life the miner’s profession occupies an important place. Today, thanks to the first International Mining Sabantuy, we learned that our compatriots worked at all  the  mines  from Sakhalin to Kaliningrad. Our delegates came from Sakhalin, Sverdlovsk region, Donetsk, Bashkiria, Kazakhstan, Kyrgyzstan and other regions, ” Chairman of the National Council emphasized.

In addition, Vasil Shaikhraziev presented medals and Letters of Gratitude  of the World Congress of Tatars, as well as awards from the Ministry of Culture and the Ministry of Education of the Republic of Tatarstan.

A Letter of Gratitude from the World Congress of Tatars for the great contribution to the spiritual development of the Tatar people, mutual enrichment of national cultures, strengthening ties between peoples in the name of friendship and prosperity was presented to  Deputy Minister of Culture and National Policy of Kuzbass –  chief  for interethnic relations, support of the indigenous peoples of Kemerovo region Tatyana Akimova, chief specialist of the department of interethnic relations, support of indigenous peoples of the Kemerovo region Lilia Gudadze and member of the board of the public organization “Tatar national-cultural autonomy of the Kemerovo region” Aliya Nadyimova.

“The hospitable Kuzbass with a special cultural heritage is glad to welcome all the participants of the International Miners’ Sabantui. On the eve of the 300th anniversary of our region, it is a great honor to receive guests of this ancient holiday, ”noted Viacheslav Telegin.

Also,  First Deputy Governor of the Kemerovo Region presented awards to those public and cultural figures who made a great contribution to the organization of the International Miners’ Sabantui.