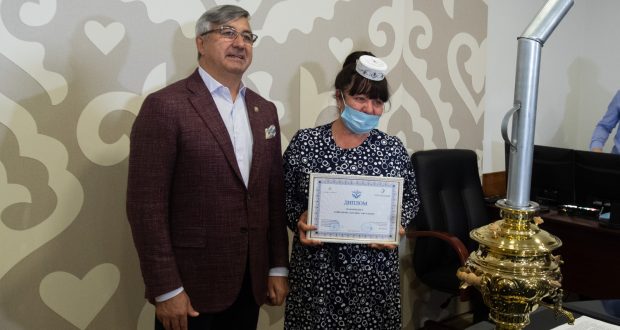 A solemn ceremony of awarding the winners of the “Kaz Omyose” contest took place at the Executive Committee of the World Congress of Tatars.

The guests of the event were greeted by Deputy Prime Minister of the Republic of Tatarstan, Chairman of the National Council of the World Congress of Tatars Vasil Shaikhraziev.

– The festival-competition “Kaz Umuse” occupies an important place in preserving the traditions and customs of our people, it is the keeper of the identity of our people. In a few years, this competition and the Tatar Kazy brand will become recognizable in our country, and then they will reach the world level, ”stressed the Chairman of the National Council.

The head of the Executive Committee of the World Congress of Tatars Danis Shakirov took part in the ceremony.

“When we evaluated the works sent to the“ Kaz Omyose ”festival, we drew attention to the fact that our youth, along with the older generation, are actively involved in preserving the wonderful traditions of our people. We are confident that working with the younger generation in the direction of developing the Tatar Goose brand will create a special industry, ”he said.

The participants of the competition-festival presented video materials dedicated to this tradition, poems and songs, theatrical performances, recipes of Tatar folk dishes, handicrafts from goose feathers, etc. There are 7 nominations in total in the competition.

-Participants in the competition were representatives of the Republic of Tatarstan and Bashkortostan, Orenburg, Tyumen, Ulyanovsk and Samara regions, Khanty-Mansiysk Autonomous Okrug and other regions, – said the head of the World Organization of Tatar Women, chairman of the regional public organization of Tatar women “Ak Kalfak” Kadriya Idrisova.

During the event, the guests were shown videos of the winners of the competition, the conversation was accompanied by pleasant memories of our folk traditions.

Hamdiya Gizamova from the Menzelinsky region became the winner of the grand prix of the I All-Russian festival-competition “Kaz Umuse”.