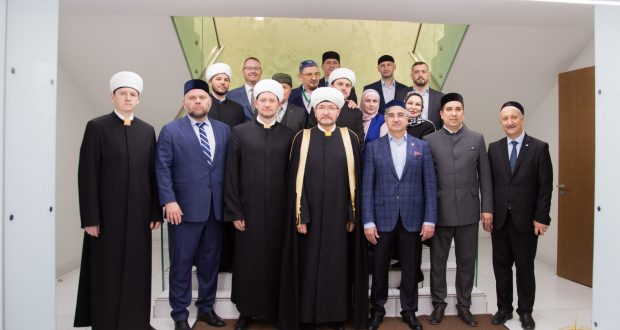 Today the World Congress of Tatars was visited by a delegation headed by the Chairman of the Council of Muftis of Russia and the Spiritual Board of Muslims of Russia, Mufti Sheikh Ravil Gainutdin. The guests were welcomed by Deputy Prime Minister of the Republic of Tatarstan, Chairman of the National Council of the World Congress of Tatars Vasil Shaykhraziev.

During the meeting, the leaders talked about the festive events dedicated to the 1100th anniversary of the adoption of Islam by the Volga Bolgaria. Issues related to the unity of the Tatar people in the Muslim world were also discussed, in which the activity of the World Congress of Tatars also plays a feasible role. Also during the conversation, Vasil Shaykhraziev emphasized that today, for the first time, a meeting with Muslim Tatars from the Lugansk and Donetsk People’s Republics was held in the building of the Tatars’ Congress. Further, the chairman of the National Council acquainted the guests with the renovated building of the Congress. The meeting was also attended by the head of the Executive Committee of the World Congress of Tatars Danis Shakirov and his deputy Mars Tukaev.