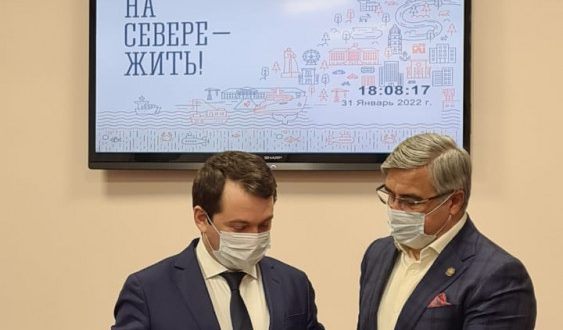 Today, as part of a working trip to the Murmansk region, Deputy Prime Minister of the Republic of Tatarstan, Chairman of the National Council of the World Congress of Tatars Vasil Shaykhraziev met with the Governor of the Murmansk region Andrey Chibis.

The meeting was also attended by the Permanent Representative of the Republic of Tatarstan in the city of St. Petersburg and the Leningrad Region Renat Valiullin, Deputy Head of the Executive Committee of the World Congress of Tatars for work with Tatar public organizations in the regions of the Russian Federation Mars Tukaev and others.

– We are very pleased to receive a delegation from Tatarstan, – Andrey Chibis noted and conveyed the words of greeting to the President of the Republic of Tatarstan Rustam Minnikhanov.

Vasil Shaikhraziev expressed his gratitude for the warm welcome of the delegation and spoke about the meeting with the leaders and activists of the Tatar public organizations of the North-Western Federal District. The Chairman of the National Council also stressed that meetings with our compatriots in the federal districts have been held since 2018.

– At the VII World Congress of Russian Compatriots Living Abroad, the Minister of Foreign Affairs of the Russian Federation Sergey Lavrov noted that the World Congress of Tatars is one of the important tools of “soft power” to promote the interests of compatriots of all peoples of the Russian Federation in foreign countries. We remind you that 460 Tatar organizations operate in 45 countries, – said the Deputy Prime Minister of Tatarstan.

The parties discussed the organization of events for the 1100th anniversary of the adoption of Islam by the Volga Bulgaria. It was noted here that preparations for a significant event are being carried out in many regions of Russia, and it was also told about the festive events scheduled for May 21.

In addition, the Tatar national holiday Sabantuy is planned to be held in the Murmansk region in 2022.

-We would like Sabantuy to be included in the list of regional events. For our part, we will provide the necessary assistance,” Vasil Shaykhraziev said.

Also, at the meeting, the issue of installing a memorial plaque to the honorary worker of the Marine Fleet, Honored Worker of Transport of the Russian Federation, honorary resident of Murmansk Anver Ibragimovich Tumparov was discussed.

The Governor of the Murmansk Region Andrey Chibis noted that work will be carried out on these issues.