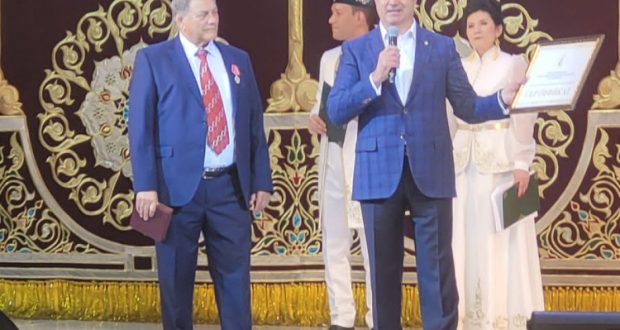 Deputy Prime Minister of Tatarstan, chairman of the National Council of the World Congress of Tatars Vasil Shaykhraziev today takes part in the celebration of the 30th anniversary of the Tatar public cultural and educational center in Tashkent. The Chairman of the Committee on Interethnic Relations and Friendly Relations with Foreign Countries under the Cabinet of Ministers of the Republic of Uzbekistan Rustambek Kurbanov, the Russian Ambassador to Uzbekistan Oleg Malginov, the representative of the Republic of Tatarstan in the Republic of Uzbekistan Aidar Akhtareev and others   were present also..
Rustambek Kurbanov congratulated the ceremony participants on the 30th anniversary of the Tatar center. He said that the Tatars living in Uzbekistan are active and noted that friendly relations have developed between Tatarstan and Uzbekistan. It also became known that issues of cooperation with the World Congress of Tatars will be considered in the future.

Chairman of the National Council Vasil Shaikhraziev welcomed   the guests of the solemn event and conveyed congratulations on behalf of the President of Tatarstan Rustam Minnikhanov. “Tatars living in Uzbekistan carefully preserve the heritage of their ancestors and pass it on to future generations,” he said. He noted the great contribution of the Tatar Public Cultural and Educational Center to the preservation and development of Tatar culture.

At the Tatar cultural center, created in the 90s of the last century, Tatar language courses for children and youth are organized, competitions are held among performers of Tatar folk songs and dances, etc. And today’s concert was decorated with performances by pupils of circles at the cultural center.

Tatars living in Uzbekistan brightly and colorfully celebrate such holidays as Sabantuy and Navruz. And creative meetings dedicated to such personalities of the Tatar people as Musa Jalil, Gabdulla Tukay, Gayaz Iskhaki and others become a meeting place for our compatriots … For many years, the center has been headed by Rishat Nabiullin.

Before the start of the solemn event, he got acquainted with the exhibition at the Turkestan Palace of Culture. Here were presented national dishes of the Tatar people, national clothes, handicrafts, household items that reflect our traditions. The exhibition was organized under the leadership of the Tatar public cultural and educational center and the efforts of our compatriots living in Tashkent. Vasil Shaikhraziev highly appreciated the exposition.