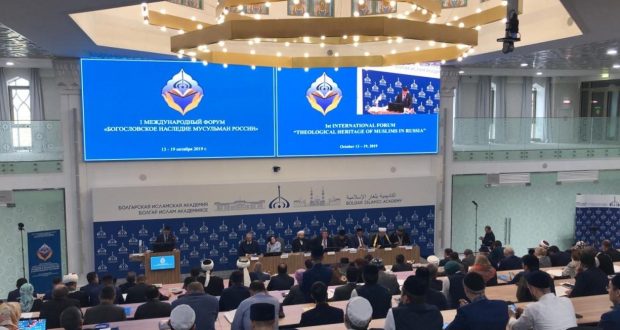 Deputy Prime Minister of the Republic of Tatarstan, Chairman of the National Council of the World Congress of Tatars Vasil Shaykhraziev attended the plenary meeting of the I International Forum “Theological Heritage of Muslims of Russia”

The forum takes place at the Bulgarian Islamic Academy from October 13 to 19. It aims to unite the efforts by scientists and experts, public and religious figures to discuss and solve pressing problems of preservation, study and development of traditional Islamic spiritual values ​​of the Muslim peoples of Russia.

According to him, despite such a short period of time, the Academy has already been able to establish itself as a scientific and educational center of Islamic education for training specialists with in-depth knowledge of the culture and history of Islam, where students receive knowledge in the areas of postgraduate and doctoral studies, a library and research centers are functioning where and the heritage of Tatar theologians is studied.

Deputy prime minister noted that this year a significant event took place for the Islamic world of Russia – 6 doctoral students of the Academy successfully defended doctoral dissertations and received a doctorate in Islamic sciences. The defense was held at a high level, which allows us to say with confidence that the educational and scientific course of the Academy was chosen correctly.