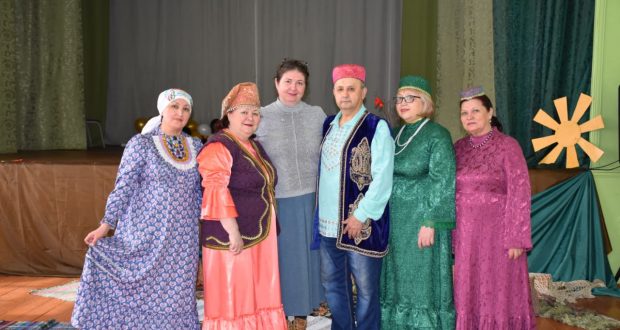 “Karga botkasy” – this is the name of this rite in the Tatar villages. When thawed patches appeared around the village, the respectable elders – aksakals told the children that it was time to meet migratory birds and cook porridge. Boys and girls in groups of several people went around the houses from one end of the village to the other and collected food for the holiday. Mistresses gave cereals, butter, milk, eggs. To make the owners more generous, the children prepared in advance various chants, which they shouted out in unison as they approached the house. In a clearing near the village, children and adults were cooking porridge in a cauldron. While the porridge was cooking, young people and children played, sang songs, danced round dances. And after the treat, the remaining porridge was laid out on stumps, on tree branches, on stones – it was a gift for birds.

On April 5, 2022, within the framework of the project “Academy of Folk Culture of the Tara Irtysh Region”, implemented with the support of the Presidential Fund for Cultural Initiatives, an outreach educational program “Karga Botkasy” was held. The traditional feast of the meeting of migratory birds was held by the project team of the ANO CSCA “Siberian Mosaic” together with specialists from the Center for Tatar Culture of the Public Educational Commission “House of Friendship” in Tara on the basis of the Bolsheturalinsky SDK for students in grades 1-8 of the Bolshe-Turalinskaya secondary school. In order to exchange experience of successful practices in the field of updating the intangible cultural heritage, specialists from cultural and educational institutions were invited to the event.

Children and adults took an active part in the event, learned how the holiday was born, about its history, traditions and rituals. They collected food for the holiday, saw the preparation of porridge on an impromptu fire, guessed riddles, played with great interest together with the fairy-tale hero Shurale in Tatar folk games, in which there is a lot of humor, jokes, and competitive enthusiasm. At the end of the event, all children and adults were treated to delicious porridge. Shurale (a lazy spirit) suggested that the children hang bird feeders and greet migratory birds with calls and treats so that spring would come faster and the long-awaited warmth would come.

The administration of the ANO CSCA “Siberian Mosaic” thanks the specialists of the Center for Tatar Culture of the PMC “House of Friendship” (methodist – Satysheva G.M.) and the Bolsheturalinsky SDK (head – Rakhmangulova G.M.) for their help in organizing and holding the event