Home / Interview / Rinat Zakirov: “Religion in Tatarstan is a factor of stability” 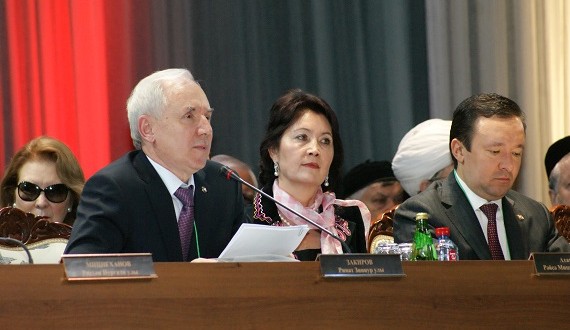 Rinat Zakirov: “Religion in Tatarstan is a factor of stability”

Despite all the talk about the possible loss of language and culture by the Tatars, chairman of the Executive Committee of the World Congress of Tatars Rinat Zakirov believes that the nation is not in danger of losing main cultural values. In an interview to TatCenter.ru he explained why the language, culture and religion, in the aggregate, are the spiritual core of the Tatar people.

– Rinat Zinnurovich, what do you think, how much, at this time, the influence of this or other religion on society and government is manifested in Tatarstan?

– In my opinion, the impact of a particular religion on power in Tatarstan is not felt. The society, too, as a whole, remains secular. If you look at happy stated, it can be seen that in all of them, clearly and consistently the principle of separation of religion from state is implemented. So, the relationship of religion and the institutions of society should be governed only by the Constitution and laws.

In general, in Tatarstan, a policy of equal treatment for all religions is pursuit, giving positive results: the atmosphere of religious tolerance and mutual trust in representatives of various faiths is ruled in Tatarstan.

– In what Tatarstan holds the right policy in this issue, and what, by your opinion, there are some difficulties?

– With regard to the difficulties in Tatarstan itself no special tension is observed. However, there are forces that would like to bring artificial problems to the society. Take, for example, such question as the teaching of religion at school.

Do you remember that question having, stirred up all the congregation? I believe in Tatarstan did the right thing, not allowing their schools purely religious subjects and insisted on teaching the history of world religions. Life has confirmed the correctness of this line, we have avoided many conflicts on this ground. There were a lot of rumors about the existence of radical Islam in Tatasrtan, but in this matter, I see no reason to dramatize the situation.

– President of Tatarstan Rustam Minnikhanov in his Address to the State Council said that your organization would l participate in the implementation of the strategy of the state national policy. How exactly will manifest this part? What activities within the strategy will be carried out this year, what is scheduled for next?

– The strategy of the state national policy provides for the preservation and development of indigenous cultures, languages, traditions and customs of the peoples, living in the Russian Federation. The World Congress of Tatars in the face of its many regional and local organizations consistently engaged in preservation and development of history, culture, education, language, traditions and customs of the Tatar people.

For example, in December, this year, Russia forum “Business partners of Tatarstan” will be held in Kazan, which is to bring together businessmen interested in developing relations with our republic. In light of the current economic situation it is important to find new markets for the products of the republic, and thereby strengthen the bilateral ties between the regions.

We can say that one of the most important tasks of the Congress is the formation of tolerance and openness in relations with other nations among the Tatar population of the republic This task is being performed successfully.

– How strong can be the influence of religion on maintaining stability in the example of Tatarstan?

– I would put the question differently: how religion should be a factor taken into account by the authorities of Tatarstan to maintain stability in the country?

Stability in Tatarstan depends on the successful interaction between different groups in society and the authorities. Public bodies have special institutions involving interaction with religious organizations. One can safely say today in Tatarstan religion is a factor of stability.

– Should the State somehow regulate the religious life?

– Our republic has its own laws governing the processes in this field. For example, two years ago, after the events (terrorist attacks in Kazan, that killed theologian Waliullah Yakupov, and then Mufti Ildus Faizov was injured – ed.), Parliament of Tatarstan adopted significant amendments to the law on religious organizations. Through them, the recognition of diplomas of imams trained in foreign universities is regulated. Now, a special expert commission considers nostrification of diploma of each individualand the appointment of imams in specific parishes.

– Is it important for the Tatar people, for the formation of national identity, correlation with any religion?

– Historically, the Tatars in the bulk are Muslims. However, there is a sub-ethnic group of people who profess Christianity. Thus, for the Tatars, a major role in determining the identity of plays the language and culture.

– Based on what traits, in your experience, Tatars around the world are united?

– Experience of more than twenty years in the World Tatar Congress shows that the Tatars, primarily together based on common spiritual values, language, culture, traditions and customs of the people. As for religion, this factor also appears in many folk traditions and customs. Of course, Islam to some extent is the unifying factor in the life of the Tatar community, but I would not exaggerate its significance.

– Is there, currently, a threat of loss of culture and language by the Tatar people?

– I will answer this question shortly. People with deep roots in history, thousands of years of literature, high culture, owning diverse genres of art, development of language and rich folklore, in my opinion, is not threatened with extinction. We can only talk about choosing different paths of development that the losses were minimal.

– Is it necessary for Tatarstan to pay more attention to religious education, both among the religious leaders and the community?

– I believe that this work is in Tatarstan is set at the right level – The Russia Islam University enjoys a deserved authority throughout the country. In my opinion, we need to engage more in religious education of Tatarstaners. In particular, it would be necessary, without delay, to bring classical works and traditional heritage Tatar theologians for readers.