Home / News / Rustam Minnikhanov: “We are waiting for a new federal standard, according to which the state language of the republic will be taught two hours a week” 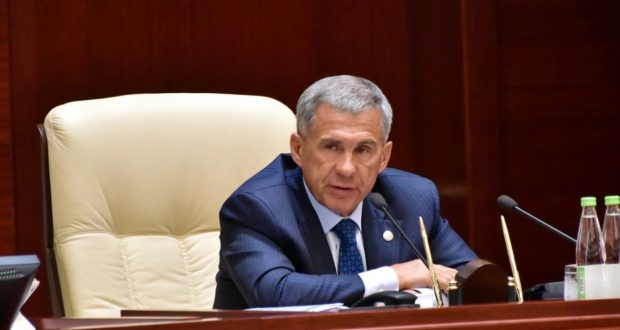 Rustam Minnikhanov: “We are waiting for a new federal standard, according to which the state language of the republic will be taught two hours a week”

Today at a meeting of the State Council, Rustam Minnikhanov commented on the situation in the republic  with the teaching and studying of state and native languages. The President said that conciliation proceedings are currently under way with the federal center, at all levels of state power, and in the near future the problem will be resolved.

“In fact, we have come a long way,” he said, “a lot of emotions, many mistakes, many changes. Nevertheless, we have prepared a version that takes into account all the norms of federal and republican legislation. ” The President of Tatarstan stressed that the decision proposed by the Ministry of Education and Science of the Republic was previously agreed with the specialists of the Ministry of Education of the Russian Federation.

Rustam Minnikhanov also assured that the teachers of the Tatar language should not be afraid of the abbreviations: “The academic quarter has  started, we decided that no teacher of the Tatar language will be dismissed during the academic year. We already have road maps for each school. We are talking about retraining, or another solution. Schools should remain calm. There will be no illegal steps on our part. In addition, we will take all necessary measures to equip schools with a sufficient number of Russian language teachers. ”

The President of Tatarstan also said that now in the republic there is a new federal standard, in which the state language of the republic will be taught two hours a week. “I am sure that we will complete this work to the end,” concluded Rustam Minnikhanov and noted that negotiations are currently underway with the Russian President’s Administration on this issue, and there is understanding from them.

The President of Tatarstan today also addressed the Prosecutor of the Republic Ildus Nafikov with the request “not to touch the national feelings of either Russians or Tatars”.

Rustam Minnikhanov suggested to the deputies “not to discuss once again the importance and seriousness of this task, which everyone understands”, but to give time to complete all conciliation procedures with the Ministry of Education and Science of the Russian Federation. “After that, we will report in a final form to the parliament on the work done,” Rustam Minnikhanov said.