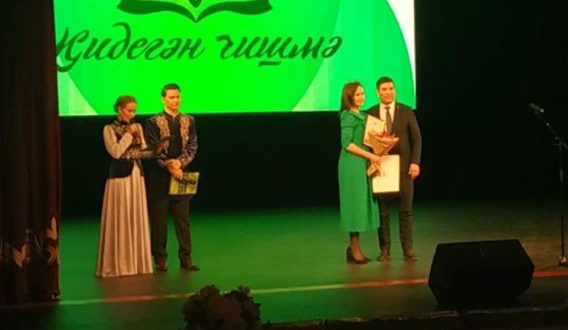 Danis Shakirov, head of the Executive Committee of the World Congress of Tatars, took part in the creative evening “Shushy Zhirdyan, Shushy Tufraktan Bez”, organized by the literary and musical association “Kidegun Chishmu” in Nizhnekamsk. He greeted the audience on behalf of Deputy Prime Minister of the Republic of Tatarstan, Chairman of the National Council of the World Congress of Tatars Vasil Shaikhraziev.

The literary and musical association “Zhidegәn chishmә” has almost 40-year history. During this time, wonderful creative evenings were organized, in which many famous writers and artists took part. And today a colorful event is taking place on the stage of the House of Folk Art in Nizhnekamsk.

The head of the VKT Executive Committee Danis Shakirov presented Letters of thanks from the World Congress of Tatars to our active compatriots living in Nizhnekamsk.