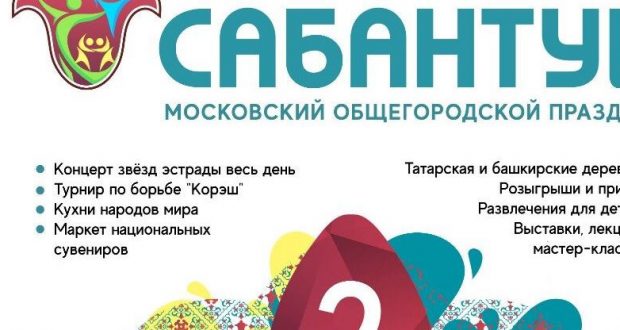 On July 2, 2022, on the territory of the Kolomenskoye Museum-Reserve, with the support of the Department of National Policy and Interregional Relations of the city of Moscow, the annual Moscow citywide holiday Sabantuy-2022 will be held.

Sabantuy is a traditional Tatar-Bashkir family, sports and labor holiday that takes place every summer in 158 cities around the world. The Moscow Sabantuy is a holiday of the peoples of the capital, a unique venue that is visited annually by more than 250,000 people. The continuity of generations, interethnic communication and cultural exchange emphasize the main idea promoted by the organizers of Sabantuy-2022 – the inviolability of the cultural and spiritual traditions of our Motherland.

“We are opening a series of summer events with Sabantuy, a long-awaited event that has been loved by Muscovites and guests of the capital over the years. Invariably, this hospitable and hospitable holiday brings together people of different nationalities and religions in an atmosphere of peace, friendship and good neighborliness. I am convinced that this year the Moscow Sabantuy will certainly please visitors with a bright, rich program with a concert, a fair, master classes and tastings,” said Vitaly Suchkov, head of the Moscow Department of National Policy and Interregional Relations.

The grand opening of the Moscow Sabantuy will take place at 13:00. Among the official guests: representatives of the Government of the Russian Federation, the Government of Moscow and the Moscow Region, the Republic of Tatarstan and the Republic of Bashkortostan, prominent political, spiritual and public figures, representatives of business circles.

“Tatar and Bashkir villages” – authentic stylized courtyards of the last century – will allow you to touch the life of the Tatars and Bashkirs, to be transported to the past. Fairs of national handicrafts, folk games, performances by artists will be held on the territory of each village. Guests of the Tatar village will see an exhibition of old chests, samovars and handicrafts made of wood.

The site of the Spiritual Board of Muslims of Moscow this year will be dedicated to the promotion of reading books – here everyone is waiting for speakers, communication with writers, an open-air library. Also, the exhibition “Muslim peoples and rulers” will be open all day.

In addition, visitors to Sabantuy will be able to taste national dishes at the “Cuisine of the World”, walk along the alley of national tents “Street of Good Neighbors”, take part in various drawings, master classes for children and adults, see the awarding of winners of equestrian competitions, and on the site of the national wrestling “Koresh” to watch the competition for the title of the best batyr.